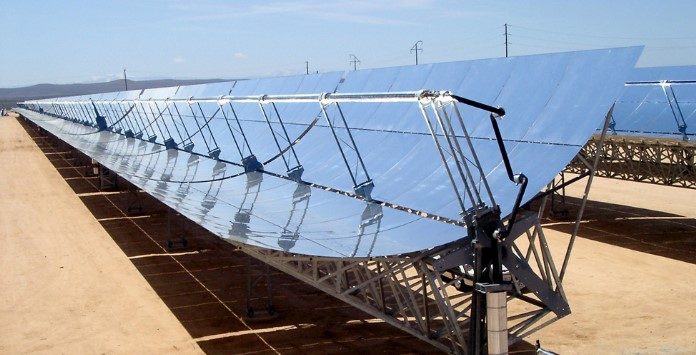 ENG Siemens, EDP Inovação and the University of Évora, in partnership with the German Ministry of Environment, Nature Conservation and Nuclear Safety and other German technological companies, are going to build in Portugal a prototype of a thermoelectric solar plant that will work with molten salt as heat transfer medium.

This project – the first of its kind in Portugal – aims to demonstrate the technical and economic viability of solar thermal power plants with parabolic cylinder collectors. Proposals for improvements in the merger of salt and adaptations to the design of the plant will also be investigated.

With a predicted length of 300 meters, the installation in Évora will use molten salt to replace conventional thermal oils, operating at temperatures that will exceed 500ºC. The steam generated at higher temperatures will allow the steam turbine to operate more efficiently during energy production.

The University of Évora will be in charge of testing and optimizing this technology for three years. For its part, EDP Inovação (Energias de Portugal) will provide the location and installation of this project.

The potential offered by different types of salt will be investigated in this experimental installation, which will be equipped with receiving tubes from Archimede Solar Energy (ASE), a 45% owned company by Siemens. The project will not only include refined salt, but also salts of different compositions.

One of the challenges related to the use of other salt compositions is also the discovery of ways to lower their melting point. The potential risk of freezing in salt-carrying systems and heat losses throughout the process can thus be significantly reduced.

Components for solar thermal power plants are an integral part of Siemens’ environmental portfolio. In the past fiscal year, portfolio revenues totaled 28 billion euros, making Siemens the largest supplier of environmental technologies in the world. In the same period, our products and solutions enabled customers to reduce CO2 emissions by 270 million tons.

An amount equivalent to the CO2 emissions produced by the megacities Hong Kong, London, New York, Delhi and Singapore.